Fundamentals: U.S benchmarks are higher this morning as they claw back late session profit-taking ahead of the bell. Those from Europe are up about 0.5% but Asia is lagging despite China stimulus talk being a major catalyst in this enthusiasm. Today, China’s Politburo, the policy making committee, said that “preemptive and prompt” action is needed to solidify the economy. Analysts expect a wave of tax cuts and fiscal stimulus that boosts infrastructure spending. China’s Manufacturing PMI missed expectations on Tuesday night and though last night’s private Caixin survey beat expectations, it simply avoided a contraction at 50.1 versus 49.9 expected (below 50 is a contraction). Manufacturing data from around the world is being closely watched this week on concerns it’s a casualty to the international trade conflict. That from the U.K missed this morning, we look to U.S PMI data at 8:45 am CT and the more closely watched ISM Manufacturing read at 9:00 am CT. Eurozone reads are tomorrow morning but, on the day, it will be drowned out by U.S Nonfarm Payroll. However, the British Pound is more than a penny higher after the Bank of England policy meeting and less negative Brexit news, bringing a tailwind to the Euro. This coupled with a stronger fix for the Chinese Yuan has the U.S Dollar on its heels, equating in the larger risk appetite in equities. Still, we must point out that commodities are not buying the narrative; Crude, Palladium and Soybeans are all lower this morning and Copper is up a very unenthusiastic penny given it was down more than 10 cents on the week.

Weekly Jobless Claims and Nonfarm Productivity are due at 7:30 am CT.

Another deluge of earnings is expected today but Apple after the bell will be the only true focus. Investors look to the largest company in the world to confirm a strong consumer in the third quarter and to gather a pulse on the direction of not only the domestic but global economy with an emphasis on China through the end of the year. Apple will either soothe the recent volatility or be the catalyst for more.

Technicals: Yesterday, the S&P traded to a high of 2737.25 before settling at 2711. This was significant for two critical technical reasons. First, price action failed at major three-star resistance at 2734.50-2739.75 and second, it did not settle above our first major three-star resistance at 2707-2711. The bulls arguably have an edge given the momentum play from Monday’s low, but the bears can just as quickly have a much clearer edge below the psychological 2700 area. A continued close below what is now the pivot at 2712.25-2713.25 will keep the bulls from gaining the driver’s seat in the near-term. While first key support comes in at 2704-2705.50, heavy waves of profit taking down to 2682-2686 is possible. This major three-star level will bring strong support, but a move below here could easily accelerate the selling. Given that Apple releases earnings typically at 3:30 pm CT, after the 3:15 settlement, the electronic close should be taken into consideration.

Fundamentals: Export sales this morning is the “big-ticket item” in terms of new news this week that came in at 394,400 metric tons for 2018/2019 and 5,000 metric tons for 20019/2020, nothing to write home about. The U.S. dollar marched higher yesterday but is erasing gains from the previous three sessions in the early morning trade. A weaker dollar should put some wind in the sails for the grain markets. Harvest in the states is having a diminishing effect on price, attention will continue to shift towards South American crop developments.

Technicals: Corn futures continue to trade towards the low end of our support pocket, which is a good spot to look at buying in terms of risk/reward; remember, price is what you pay, value is what you get. The support pocket we have referenced for the past several weeks remains intact from 360 ¼-363 ½, this is a MUST hold area for the bulls. A breakdown below here could accelerate the selling. On the resistance side of things, the first line in the sand is 368, consecutive closes above here opens the door for another 10 cents of upside.

Yesterday’s Close: January soybeans finished yesterday’s session up 4 ¾ cents, trading in a range of 10 ½ cents for the day.

Fundamentals: Export sales came out this morning at 395,800 metric tons for 2018/2019 and 60,000 metric tons for 2019/2020, a disappointment for the bull camp. With the expiration of the November contract, many of the longs who have battled the market for the past few months have likely chosen to throw in the towel instead of rolling positions. This may provide a relief rally to suck some of those participants pack in the market at higher prices. The broader fundamentals remain bearish, but there may be opportunity to the buy side in the very near term.

Technicals: The market is lingering near the psychologically significant 850 handle on relatively light volume. The bulls want to see consecutive closes above here to encourage short covering from the funds. Until then, the bears have a clear advantage on the chart. There is some technical support from 839 ¼-844 ½, but the more significant pocket doesn’t come in until 825-827 ¾.

Yesterday’s Close: December wheat futures finished yesterday’s session up 1 ½ cents, trading in a range of 11 ¾ cents for the day.

Fundamentals: The stronger U.S. dollar has been a major headwind for wheat, but a as it retreats this morning it is acting as a nice gust of wind in the sails for prices. The U.S. dollar has nearly erased all the gains over the last three sessions, if the retreat continues, we expect to see that spill over into positive price action for commodities like wheat. Export sales this morning came in at 582,500 metric tons for 2018/2019, a fairly friendly number for the wheat market.

Technicals: Yesterday’s reversal could be the making of a double bottom, we started working with clients in giving the buy side another chance when we saw the volume working back in on the bid. First resistance comes in from 515-519 ½, a close above here is a green light for a bigger move higher. On the flip side, a failure to maintain this momentum will throw water on the fire. A close back below $5.00 will neutralize our stance. 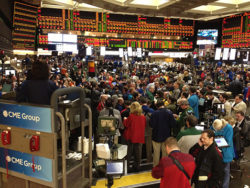