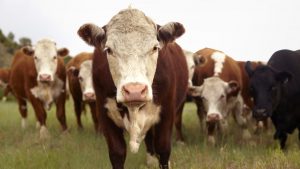 This afternoons boxed beef prices were up slightly.

April live cattle futures finished gaped higher to start the week, marking the high print in the opening minutes as price action fizzled out for the remainder of the day. The overall price action for the session was neutral but we continue to believe there is opportunity at the top end of the range to consider selling, whether that be reducing long exposure or legging in on shorts. If the market fails to break out above resistance in the coming sessions, it is likely that we see long liquidation take prices back towards first support which comes in from 122.475-122.75. If the bulls do achieve a breakout, the next resistance pocket comes in from 127.20-127.35.

March feeder cattle saw some volatility on the open, as we saw a “surprise” gap higher with prices testing our “last line of defense” from 149.40-150.00. The market was not able to hold water at those levels and that led to some pressure for the remainder of the day. If that market fails to gain traction here in the first half of the week, we could see selling pressure come back into the market and press us towards first significant support which we have marked as 143.25-143.50. As with the fat cattle, we continue to feel that this is an opportunity to consider the sell side regardless if you are bullish or bearish (reduce longs/initiate shorts).

April lean hogs finished today’s session down .50 at 73.30, trading in a range of .90. Supply side fundamentals continue to lend hand to keeping a lid on a significant rally. Technical resistance from 76.225-76.40 held last week and will continue to be the significant pocket to keep an eye on. On the support side, the market is making a run towards the 100-day moving average which comes in at 72.80. A break and conviction close below opens the door to accelerated selling pressure which could press prices towards the bottom end of the range which we see coming in from 70.625-71.15. This pocket represents The November lows and the 200-day moving average.

Fundamentals: The Euro began working lower late Friday afternoon and continued on that path through today’s session. This slow and steady drip eludes to traders taking positions off the table at the beginning of a pivotal week that has the State of the Union Tuesday night, Fed decision Wednesday and Nonfarm Payroll Friday. U.S PCE Index data was in line with expectations today. Tomorrow morning brings Eurozone GDP at 4:00 am CT along German CPI. U.S Case Shiller is due at 8:00 am CT and Consumer Confidence at 9:00. Both fundamentally and technically, the Euro has more upside in the long-term.; we believe pullbacks are buying opportunities However, traders do want to manage risk properly through what is expected to be a volatile week. Do not forget to read out Tradable Events this Week.

Technicals: Price action is attempting to relieve itself from overbought conditions. The 14-day RSI reached 75 last week. The CoT showed traders expanded the already record long position in the Euro by 25% in the week ending January 23rd. The Dollar Index is bouncing from the most oversold on the weekly since November 2007. To the downside we have first key support at 1.2349-1.23685 and today’s session low of 1.2374 was kept in check by this level. Though we remain long-term bullish, we would rather be buyers closer to major three-star support at 1.2209-1.22135.

Fundamentals: The Yen retreated slightly today, but given recent volatility and today’s Dollar strength, this was a solid session for the currency. Still, we are concerned that Wednesday’s Fed meeting can bring a hawkish surprise and near-term pressure for the Yen. Furthermore, the Yen is attempting diverge from falling Treasury prices but if the Treasuries are lower because of the Fed, the Yen is likely to take similar heat. In a week that will center around U.S political and monetary policy, there are some key data points out of Japan to watch. Household Income and jobs data is due tonight at 5:30 pm CT. BoJ Core CPI is due out at 11:00 pm CT. Tomorrow night is going to be a volatile one for reasons more than just the State of the Union with Japanese Industrial Production data along with Chinese Manufacturing.

Technicals: The Yen has finally picked itself up out of the gutter but faces a tremendous hurdle this week in maintaining its recent gains. Price action is showing signs of fatigue just below major three-star resistance. This level will be extremely critical and a close out above here on the week should spark the next bull leg higher. While we see first key support at .9164, we would rather be buyers against major three-star at .9089-.91035.

Fundamentals: The Aussie has gained more than 8% since its December bottom and as the year unfolds there is room for further gains. For now, we believe it should be most vulnerable to a strengthening Dollar and domestic data this week. First, last week’s CPI read out of its neighboring New Zealand missed widely and we will be watching tomorrow nights Aussie CPI read that will be accompanied by Chinese Manufacturing data (China is Australia’s top trade partner). Tonight, there is Business Confidence data at 6:30 pm CT.

Technicals: Price action traded to a high of .8135 on Friday, the highest level since May 2015 before paring gains. Pullbacks in the Aussie over the last two months of been extremely shallow and the trade is overdue for a sharp move. The weekly RSI is testing the level in which it hit last September, when it traded at this price, this is the highest since 2011. We believe that if the Aussie can chew through major three-star support at the .8033-.8037, the door will open for it to trade down to .7874-.7881.

Fundamentals: The Canadian stayed in a very tight range through the session as NAFTA talks wrapped up with a positive vibe. We look to a busy week of U.S political and monetary policy to be the key catalyst in price action but at the same time traders need to keep an eye on Chinese Manufacturing tomorrow night and major Canadian data points Wednesday; monthly GDP data and Raw Materials Price Index. We are very bullish the Canadian in the long-term and hope to see it about 1% lower this week on the U.S Dollar consolidating higher from oversold territory to present a strong buy opportunity, rather than down on negative news out of Canada.

Technicals: Price action is holding strong against major three-star resistance at .81005-.81195. One concern technically, is trend line resistance from July 2014. However, like the Aussie did against a similar trend line, we believe the Canadian can get out above here in due time and this can ultimately spark a move to .8524. We would like to see price action dip to .7931-.7949 in order to present the aforementioned buying opportunity.