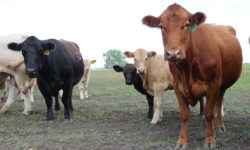 Fundametnals: The market caught a bid on two positive developments. The softening U.S. dollar has put some wind in the sails for corn and could continue to do so if it continues to retreat. The bigger catalyst was a tweet from President Trump suggesting that the U.S. and China were making some progress. This was a shot of adrenaline that started wearing off in the afternoon session. The tweet provides “hope” but the dollar is more meaningful to us at the moment. Export sales yesterday morning came in at 394,400 metric tons for 2018/2019 and 5,000 metric tons for 20019/2020, nothing to write home about.

Technicals: The market shot higher yesterday but retreated off of those highs which isn’t always the best sign, technically. As mentioned in our weekly “2 Minute Drill” yesterday, we continue to believe there is value to the buy side. If the bulls can finish the week back above 370 ¾ it bodes well for next weeks trade. The next resistance pocket comes in from 375 ¾-378 ½, this pocket represents a key Fibonacci retracement and the October highs.

Fundamentals: Poor exports put a damper on the morning, but that quickly changed after a tweet from President Trump suggested the U.S. and China were moving in the right direction with trade talks. The market popped instantly. In our view, this was more short covering than renewed bullishness from buyers. The bearish news has been priced in and funds are looking for new opportunities, there are only so many “harvest pressure” headlines the market can take. If it were any other time of the year that would have likely been a 15-20 minute pop and drop in our minds. What did you expect Trump to say a week ahead of elections? That the U.S. and China were nowhere close? On top of that, it was reported weeks ago that the U.S. and China would talk at the G20 summit; FYI, that’s what world leaders do at world summits. The softening U.S. dollar also helped add an extra spark. In yesterday morning’s report we mentioned that there “may be opportunity to the buy side in the very near term.”, if you were long, don’t be greedy and take your profits or at least reduce risk. We think the market will start settling into a new trading range, see the full technical breakdown below.

Technicals: The market blew through first resistance from 864 ½-865 ¾ which opened the door to our next objective which we defined as 880-883 ¾. This pocket represents the 100-day moving average and the 50% retracement from the end of July highs and the contract lows in September. This will be an inflection point to wrap up the week. A close below could encourage additional pressure back towards that 864 ½-865 ¾ pocket.

Fundamentals: Wheat was able to benefit from spillover moment in corn and beans but the bigger longer-term catalyst were also supportive, that is decent exports and a softer U.S. dollar. Wheat exports have been picking up and is now a trend in our mind, meaning there may be an opportunity for this market to work higher (especially if the dollar continues to soften up). Export sales yesterday morning came in at 582,500 metric tons for 2018/2019, a fairly friendly number for the wheat market.

Technicals: The bulls need to defend 5.00 for their dear life, a close below will wash away their hopes and dreams of a near term bottom. For the bulls to encourage additional short covering we need to see the market achieve consecutive closes above 515-519 ½. From there the market has another 10 cents before the next significant resistance pocket.

Fundamentals: Equity markets around the world are surging higher on news that President Trump asked his cabinet to draw up the terms for potential trade deal with China. He and President Xi had a phone conversation yesterday discussing Trade and North Korea that was described as productive ahead of their meeting at the G-20 Summit later this month. The S&P is up 0.8% and the NQ gained as much as 2.0% from its opening low last night after Apple’s earnings call. Asia is leading the way with the Nikkei and Shanghai Composite each up more than 2.5% and the Hang Sang up more than 4.0%. Major benchmarks in Europe are also green with the German DAX gaining 1.4%. These headlines come before Tuesday’s midterm elections which is a source of uncertainty and a major catalyst for much of October’s volatility; markets do not like uncertainty. These headlines have also deflected the attention from two major news events that were expected to characterize the week; Apple’s earnings and Nonfarm Payroll.

First, Apple reported earnings after the bell yesterday and disappointed. The stock has pared some losses along with the broader market enthusiasm but is still down more than 5.5% premarket. Investors are clearly underwhelmed with the company’s new strategy to forego reporting individual sales numbers for their benchmark products. Despite beating top and bottom line estimates, the company’s soft guidance has led the stock lower.

October Nonfarm Payroll is out this morning at 7:30 am CT. Wage growth is the major component and is expected to come in at +0.2% MoM, annualized at +3.1%. After Average Hourly Earnings growth slipped to 0.1% in June, the last three months have shown +0.3%. This component along with lagging underlying inflation has kept the Federal Reserve at a ‘gradual’ pace of raising rates. A stronger than expected read this morning will be seen as supportive to a more hawkish Fed and potentially weigh on the tape. Today is setting up to be dynamic given that the Trade news is more than offsetting the world’s largest stock shedding 5.5% and that all of this coming on the heels of the worst month for stocks since 2011. Job growth is less important but nonetheless has been a steady component all year bringing broad support to the economic growth backdrop, expectations this morning are at 193,000 jobs gained.

Earnings from Chevron, Exxon, Alibaba, AbbVie and others are due ahead of the bell. Earnings are the lifeblood of stocks and after Apple, these are not to be underestimated. ISM – NY Business Conditions are due at 8:45 am CT, Factory Orders and Cap Goods Shipments Non-Defense are released at 9:00 am CT.

Technicals: The S&P is ripping higher into this morning, trading more than 40 points from its overnight low of 2722.75. Momentum remained strong through yesterday’s session and Apple’s earnings only forced a minor reaction. Ultimately, we have remained unequivocally Bullish in the longer term, but have a lack of trust for it in the near term above what was major three-star resistance at 2712.25-2713.25. Today’s strength cannot go unnoticed, but we now have two questions that are likely to be answered today. First, will the S&P hold the overnight rally, or will investors sell within the first hour? Something that characterized the month of October. Second, how will the tape react to strong major three-star resistance at 2772-2775? This level aligns multiple key technical indicators as well as the 200-day moving average. Yesterday’s session did not close out above major three-star resistance at 2734.50-2739.50; this level will now bring major three-star support, a close below here though will signal a failure.

Fundamentals: The sharp downtrend continued yesterday for Crude as the December contract hit its lowest level since June 21st and the front-month hit its lowest level since April. Crude has seen zero support from a weaker U.S Dollar, stronger Yuan and positive news are Trade. Weighing on the market is growing production, building inventories and the concern that waivers on sanctions will keep Iranian exports higher than initially expected. Japan, South Korea and India receive exemptions to import Iranian Crude and Secretary of State Pompeo will announce the details later today. Crude Oil is now testing a price point in which the market has responded at all year, it is go-time over the next week.

Technicals: Price action is testing into crucial support levels but is struggling to gain footing. We have said all year that due to the overcrowded long position, sharp moves to the downside have quickly been exacerbated as the overcrowded position liquidates. Still, as we noted Monday, the net-long position as of October 23rd is at the lowest level since September 2017 when Crude was at $50. We are looking forward to today’s CoT, but we also must understand that the true positioning will be even less after this two-day bloodbath. Strong support comes in at 62.98-63.25 aligning multiple technical indicators; Crude must respond. Only a close back above 65.00-65.38 will neutralize the near-term weakness. Down here, we do find value.

Fundamentals: Yesterday, Gold settled at its highest level since July 25th. The major catalyst: U.S Dollar weakness and Chinese Yuan strength coupled with a constructive technical pullback. The Euro and British Pound also added strength to this backdrop. Typically, days like yesterday where Gold gains anywhere in the ballpark of 2%, you see the metal settle back in. However, positive reports on Trade and that President Trump has instructed his cabinet to begin piecing together a trade deal ahead of his meeting with President Xi later this month has added strength to the Chinese Yuan which is now up 1% on the week against the Dollar. Nonfarm Payroll is due at 7:30 am CT and as we discussed in the S&P section above, it is all about wage growth. Expectations for Average Hourly Earnings are +0.2% MoM and +3.1% annualized. A better number will support the Dollar as it firms the Federal Reserve’s path of rate hikes; Gold will lose ground. However, a miss could send Gold above last week’s 1246 high and through the psychological 1250 level.

Technicals: Gold is holding at key resistance at 1233.5-1238.3, a level in which it has struggled mightily over the last month. Still, major three-star resistance comes in above at 1244-1250. Yesterday’s rally will remain extremely constructive for the long-term as long as it holds above first key support that aligns with the 100-day moving average at 1227.1. We are looking forward to today’s Commitment of Traders to understand the positioning of shorts with price action nearing a breakout but also approaching a seasonally soft time of year.